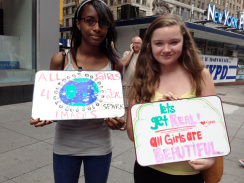 At the end of June, teenage girls had a big win for positive body image and media representation when Seventeen Magazine agreed to a pledge stating that they would be transparent about the magazine’s photo-shooting and image editing process. In addition, the magazine vowed to never change a model’s body or face shape. Julia Bluhm was the 14-year-old behind the petition, and told the magazine “I want to see regular girls that look like me in a magazine that’s supposed to be for me. For the sake of all the struggling girls all over America, who read Seventeen and think these fake images are what they should be, I’m stepping up.” 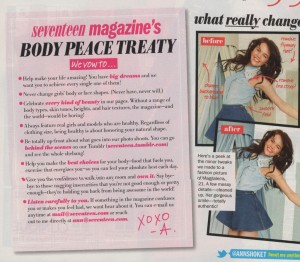 This past Wednesday, young women inspired by the change that Bluhm had created met in front of Teen Vogue headquarters to stage a mock fashion show, complete with a red carpet, to protest the depiction of women and girls on the magazine’s pages. The activists held dry erase boards asking Teen Vogue to “Keep It Real.” Emma Stydahar and Carina Cruz started a Change.org petition asking Teen Vogue to “not alter any model’s body or face and to celebrate beauty in all its forms.” By the afternoon after the visibility event in front of Teen Vogue headquarters, the petition had reached 28,233 signatures. A publicist for the magazine met with Stydahar later that Wednesday to address the concerns listed in the petition, and told Change.org that “Teen Vogue makes a conscious and continuous effort to promote positive body image among our readers. We feature healthy models on the pages of our magazine and shoot dozens of nonmodels and readers every year, and do not retouch them to alter their body size. Teen vogue pledges to continue this practice.”

Many girls like Stydahar choose to not read fashion magazines because the publications fail to represent the multitudes of difference and diversity that exist among women and girls. The petitions and requests recently made to teen fashion magazines, then, have been made for more than just one reason; the current readers of the magazines want to see better and more accurate representation of the magazines’ readership, and girls who do not read teen oriented magazines would like to have a publication that speaks to them. Given the motivation for these petitions, it would be in the best interest of all magazines made for teen audiences to comply to these activists’ demands.

Both groups of girls and young women rallying against Seventeen and Teen Vogue moved forward and gained ground with the help of SPARK, an organization created in response to the Report of the APA Task Force on the Sexualization of Girls. The organization calls for grassroots campaigning around the danger that sexualization and sexualized representation poses to girls and young women, while making sure to clarify the difference between healthy sexuality and sexual objectification. SPARK is an especially important group because it works with girls to create a solution instead of simply protecting them from the issues. The group focuses on coalitions, group effort, and the empowerment of and engagement with girls and women of all ages. If you are a girl or young woman who is involved with a mission or activity that coincides with the SPARK mission, you can contact them for help spreading the word. Email director Dana Edell at SPARKsummit@gmail.com for more information.

Former Program Assistant at the Susan B. Anthony Institute for Gender and Women's Studies at the University of Rochester.
View all posts by Kaitlin Legg →
This entry was posted in Uncategorized. Bookmark the permalink.