Post/Feminism/Media begins on Tuesday March 18! Post/Feminism/Media will offer an opportunity for scholars and practitioners to participate in a dialogue about the state of media and reporting on women in a postfeminist age around events featuring journalist Alissa Quart, filmmaker Maisie Crow, Dr. Rachael Phelps, medical director of Planned Parenthood of Western New York, and magazine publisher Andi Zeisler, founder of the journal, Bitch: Feminist Response to Pop Culture. Make a point to attend some (if not all!) of these events next week, they are not to be missed! Click on the posters for further event details. 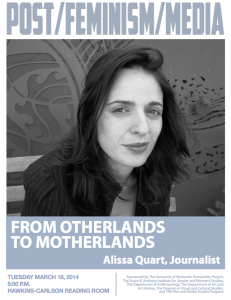 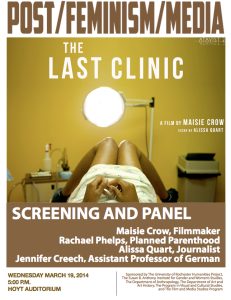 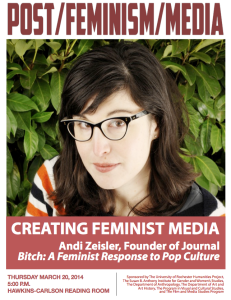 Post/Feminism/Media highlights the work and strategies of media makers who are producing critical stories about women and gender in the context of deepening class and racial inequalities, and ongoing gender discrimination in the journalism industry. This project asks how contemporary media makers produce feminist texts in the context of a postfeminist mediascape, in which feminism is either considered to be no longer pertinent because of the successes of the women’s rights movement, or to be out of sync with the goals and values of younger generations of women. What is the purchase of feminism in journalism and media production today? With the deepening economic chasms separating the rich from the rest, how can socially responsible journalism bring to light gendered and classed inequalities and the lives of middle and working-class women? What are the challenges for journalists operating in a media industry that reproduces uncritical notions of postfeminism that often reinforce conservative political agendas? In these ambiguous times, how do cultural producers create critical work on gender that addresses the real lives of people laboring in a neoliberal postindustrial economy?

The Post/Feminism/Media Project was organized by The Department of Anthropology and The Susan B. Anthony Institute for Gender and Women’s Studies. For a list of our sponsors, please refer to the poster below. 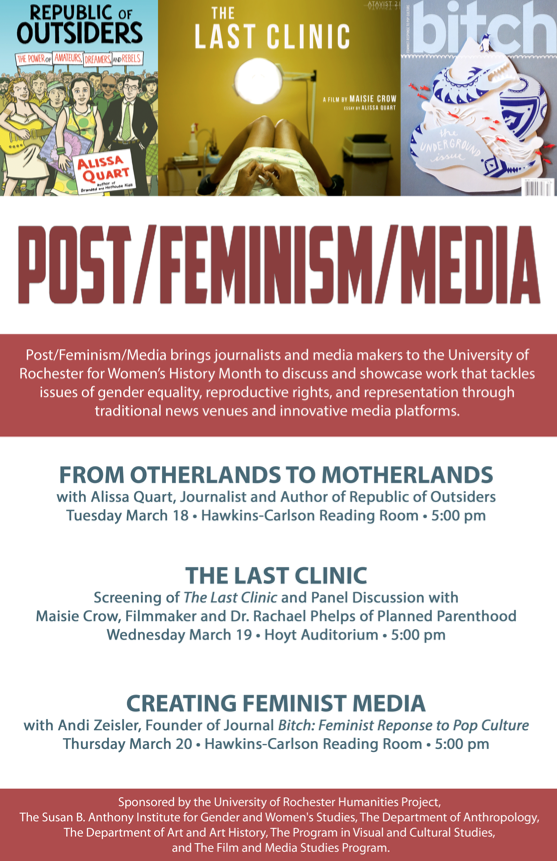